Twenty four down. Thirty one to go. 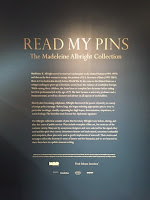 At ArtsFund's Celebration of the Arts luncheon last week an elegant woman wearing a beautiful broach told me that jeweled pins are selling like hotcakes in our area. She credited Bellevue Art Museum's Read My Pins exhibit, and I believe her.

After being described as an "unparalleled serpent" by Saddam Hussein's press, Madeline Albright wore a golden snake broach on her next visit with Iraqi officials. That led to a long relationship between Albright's diplomatic point of view and her jewelry, to the point where she described her jewelry as part of her personal diplomatic arsenal.

This unique show, which runs through June 7th, showcases over 200 pins which Albright famously used to make diplomatic statements, highlighting the ability of art to communicate in a nonverbal but powerfully articulate way. Through the beautiful jewelry and very well executed commentary about each piece, the exhibit tells the fascinating history of Madeline Albright's service as UN ambassador and then Secretary of State.

Bellevue Art Museum has been exclusively dedicated to art, craft and design since 2005. From objects made for everyday use to cutting-edge sculpture, furniture, and jewelry, BAM celebrates the creative process and skill of today's most talented makers. The museum features international exhibitions alongside some of the region's most promising artists. On my visit I also saw one of the exhibits featuring regional artists: The New Frontier - Young Designer Makers in the Pacific Northwest. Organized by the museum, the exhibit is a tutorial on the beautiful works created by furniture artists and makers in our region. It runs through August 16th.

BAM is one of few museums that grew out of an art fair. Started by a handful of dedicated volunteers, the first fair was held in 1947 and eventually led to the founding of the Museum in 1975. After undergoing a series of transformations, BAM opened the doors to its first permanent home in 2001 and continues to sponsor the Bellevue arts fair each year. See ARTSfair.

And the elegant woman at the luncheon wearing the pin? It was honoree Ann Ramsay-Jenkins, recipient of the Lifetime Dedication to the Arts award. Thank you Ann for all you do to support the arts in our community. 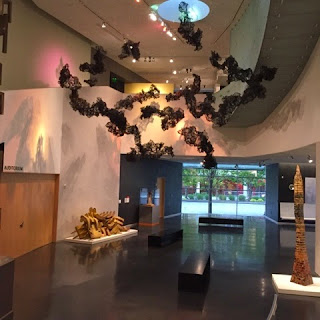