5: The Seattle Repertory Theater: All the Way

Five down.
Fifty to go. 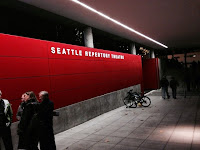 My college roommate Mark is a very successful wheat farmer in Dusty, Washington. It takes a lot to get him off his tractor and over to the "coast" for a weekend – particularly a weekend when snow closes the pass for a couple hours both days. With a little encouragement from his lovely wife Kathy, however, All the Way got him to the big city last weekend, to everyone's satisfaction.

I guess it is a blessing when you live long enough that events from your own life  start to be presented as history, in this case informed by a lot of newly available information. This is powerful theater. I am not a critic, and All the Way has already received plenty of critical acclaim, but this show left us all wanting more. Fortunately, more is on the way when we see The Great Society in December. And you can bet Mark and Kathy will be there, too.

One more thought. There is something fundamentally different and exciting about attending a performance where every seat is taken. So please, go buy more tickets for live theater!

Posted by Sandy McDade at 6:32 PM No comments: 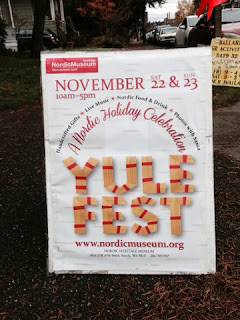 Four down.
Fifty-one to go.


Yulefest at the Nordic Heritage Museum in Ballard was a wonderful way to spend a dreary Saturday morning in November with the Grandson. The place was packed as usual, but this year a large tent was added outside the museum to provide more space for vendors, food and exhibits.

Yulefest and Viking Days (in August) are the two annual community festivals at the museum, in addition to many other events and exhibits throughout the year. The festivals are great fun, but the museum is also a serious venue for history and art. One of our daughters has been working as an intern at the museum for the past few years, helping with an oral history project that documents the experience of local folks with a Nordic heritage. The last piece I saw from the project was a fascinating and moving account by a local woman of her experience as a child in Nazi occupied Norway.

Three down.
Fifty two to go. 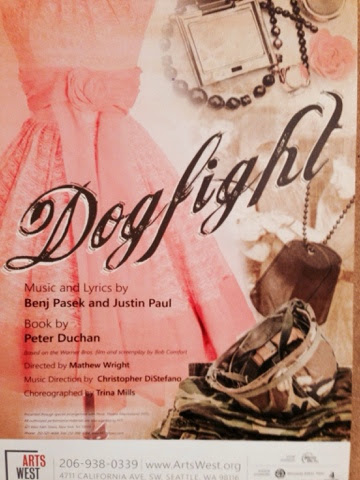 When Balagan Theater announced it was closing last month it had a collaboration underway with ArtsWest Playhouse to produce the Ben Pasek/Justin Paul musical Dogfight. Balagan received ArtsFund support last year and was on my original list of 55 organizations required to win the bet. As this was the last chance (and not wanting to create any interpretation questions on the wager for our umpire, Sarah Sidman) I found myself in West Seattle Wednesday evening. It was my good fortune.

Dogfight is a wonderful but difficult vehicle. ArtsWest rose to the challenge. It was my first, but certainly not my last trip there. It's an easy drive from downtown in the evening with lots of nearby restaurants, plenty of inexpensive parking, and a comfortable venue. Most of all, it was a poignant, thought-provoking and engaging performance that had me glued to my seat throughout and standing with the rest of the audience at the end.

Next up at ArtsWest is Judy's Scary Little Christmas (as in Judy Garland) by Joe Patrick Ward, December 4-28. Count me in. 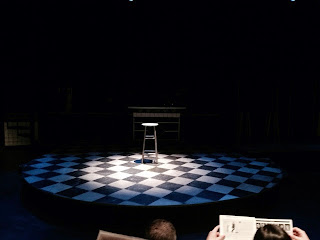 Posted by Sandy McDade at 11:23 PM No comments:

Children remind us of the incredible power of live theater. This little boy – my grandson – saw his first play last year at age 3. It was a performance of Pippi Longstocking at Seattle Children's Theater. Almost immediately after the show he began re-living the character of Pippi. He literally became Pippi. He staged endless re-enactments of the play, casting the adults around him, me included, in various roles. For weeks he insisted that he was not my Grandson, but was in fact Pippi; the Grandson, he informed us, was doing something else upstairs.


Finally, last weekend, Pippi saw Dick Whittington at SCT and it was Dick, not Pippi, who returned from the theater. I didn't make that show and don't know much about the character, except that he apparently wears a tri-cornered hat and has some exciting adventures with pirates.

Dick and I will be going to Robin Hood at SCT next June and I can't help wondering who will return from that show – and what my role will be in the subsequent family performances. Undoubtedly Friar Tuck.

By the way, the parents are delighted that Pippi has more or less permanently returned to Villa Villekulla. Pippi had attitude.

Posted by Sandy McDade at 11:41 PM No comments:

Two down.
Fifty-three to go. 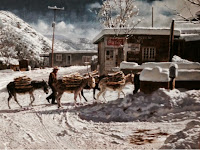 Art can bring us together, and Saturday night it brought together a group of old friends and colleagues at the Grand Opening of the Art of the American West exhibit and new wing at the Tacoma Art Museum.

It was a fun party, but the star was the exhibit and its special new home. This first exhibit of the Haub Family Collection (we are told there is a lot more art for future shows) runs through the fall of next year.  It examines more than 200 years of work by historic and contemporary artists, showing how concepts of the West continue to evolve and influence us today. The art is effectively presented around themes and subject matter rather than chronologically or by artist, and it is housed in a beautiful new space. TAM has become a big dot on the art world map.

Posted by Sandy McDade at 10:54 AM No comments:


I never danced, but in 1953 my Dad built a dance studio next to our home in Seahurst. Mom taught ballet in that studio for 50 years. She made sure her three boys saw every ballet that came to Seattle, and we were drafted every year as stagehands for the annual "story ballets".

After our own girls were grown, my wife Chris and I starting going back to the ballet. I re-discovered dance and found that ballet appreciation was instilled long ago somewhere deep in the recesses of my brain. Thanks, Mom.

At the Seattle Chamber luncheon last summer Satya Nadella responded to a question about living in the Northwest: "Every time I go to the ballet I am thankful I am here." I couldn't agree more. PNB was the natural place for me to start this campaign.

Director's Choice lived up to the artistry and excitement we have learned to expect from PNB. My favorite moments were the partnering in both A Million Kisses to my Skin and Debonair. Also loved the way the dancers walked to their places in A Million Kisses and found myself looking for and finding reflections of that movement in the otherwise (to my untrained eye) generally classical technique. In Rassemblement, the varied and intelligent program challenged the audience with the experience of slavery in Haiti.

Finally, it was fun to watch our daughter and her girlfriend check out all the old Nutcracker programs in the lobby, finding those from the years they attended as little girls.

Posted by Sandy McDade at 10:39 PM No comments: