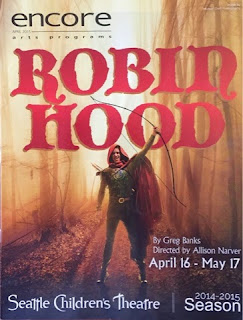 In honor of our long anticipated trip to see Robin Hood at Seattle Children's Theater, my grandson, now almost five, dug into his costume box and joined us as Peter Pan (see Children Remind Us). That seemed a fitting choice. Like Robin, Peter is a swashbuckler who bends the rules while fighting the bad guys. So having Peter Pan attend Robin Hood made a certain amount of sense. The central question posed by SCT's Robin Hood is, what is a hero? In Peter Pan, our hero takes the Darling children on a forbidden nocturnal adventure, but in the end he saves Wendy and the Lost Boys from the pirates, and everyone returns safe and sound.

In Robin Hood the question is presented more starkly: Why do we think of Robin, an outlaw and a thief, as a hero? He steals from the rich to give to the poor, but he does so in defiance of the local sheriff. The sheriff serves a nasty and corrupt prince who has taken charge while the good King is off fighting foreign wars. Plenty of fodder there for SCT's robust after-show discussion with cast and audience about what makes a hero.

Robin Hood worked well on many levels. The all-adult cast was strong and the staging excellent. There was plenty of humor, exciting swordplay, romance, and bad guys to hiss and boo. The show spoke to the adults as well as the kids, starting with the opening sequence where desperate Nottingham folks panhandled among the audience in an uncomfortably familiar manner.

SCT has produced 235 plays since its founding in 1975, an incredible 110 of which have been world premiers. It started as a Seattle Parks and Rec Department program at the Poncho Theater in the Woodland Park Zoo. Some of its earliest supporters were teachers and students from the UW's Masters Program in Theater for Youth. Today, all of the actors are Equity members and SCT is an independent non-profit, performing at two theaters in its beautiful Seattle Center home. The facility also has state-of-the-art paint, costume, prop and scene shops. When it was completed in 1995 it was the nation's only self-contained theater complex for young audiences.

The grandson was a bit too young to join in the post-show discussion about what makes a hero. Children will listen, however, as he did with rapt attention. I am sure that in the weeks to come we'll be hearing a lot about who, in his fantasy-filled world, is a hero – and why.
Posted by Sandy McDade at 11:51 PM