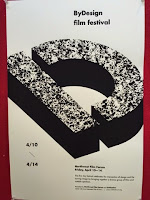 Northwest Film Forum's ByDesign film festival is an example of the wonderful variety of programs offered by ArtsFund-supported organizations. There is something for just about everyone. Interested in design and want to learn more? Then do what I did and invite an architect friend for a midweek outing to this long-running film festival that "brings together a diversity of people, ideas and creative visions to explore intersections of design and the moving image...." This year's films featured topics ranging from urban fashions to an exploration of how 3D printing will change the world, and included a panel discussion of Seattle's design renaissance.

The truth is, before this project began I had no idea there was such a festival. Now it's something I can look forward to as a way to connect with, and learn more about, art and design. The same could be said about several of the Northwest Film Forum offerings. Founded in 1995 by Jamie Hook and Debbie Girdwood, Northwest Film Forum screens over 200 independently made and classic films annually (several interesting films each week!) and offers a year-round schedule of filmmaking classes and programs that support filmmakers at all stages of their careers. Offering 60 workshops annually, NWFF has aided 250 filmmakers in the production of nearly 80 films. In addition, they offer innovative workshops and summer camps for children and teens. The Children's Film Festival presents awards for children's movies juried by kids 8 -15. In collaboration with Seattle Children's Hospital, the children's festival includes a satellite jury of young hospital patients who view their own slate of short films.

The Sauerbruch Hutton film we saw followed a German architecture firm through a series of projects, some at the competitive proposal stage and others in design and construction. We saw the architects work and struggle as a team (in a very quiet, subtle and overtly polite manner) and struggle with their clients (who were somewhat less subtle and polite). The dynamics between the older principals and the bright young talent in the firm was fascinating to watch, and applicable to just about any work environment. The film provided fodder for an interesting conversation with my architect friend. He shared fascinating insights and humorous commentary on the interaction, some of which took him back to architecture school.

Overall, it was a delightful evening and a fun opportunity to learn a bit more about the world of design through the diverse offerings of the Northwest Film Forum.