Twenty one down. Thirty four to go. 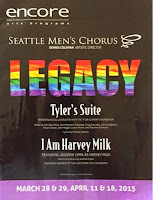 We have enjoyed the Seattle Men's Chorus for many years, and have seen several of their shows on the lighter side including holiday concerts and performances built around beloved entertainers like Debbie Reynolds. They were all great fun. But the concert we saw recently was more serious: Legacy was a powerful exploration of tragedy and triumph, an inspiring evening of beautiful music. It was clearly our favorite to date.

Tyler's Suite is an eight-piece choral work dedicated to the memory of Tyler Clementi, who died by suicide after being cyberbullied by his college roommate. The work was brought together under the musical leadership of Stephen Schwartz (composer and lyricist of Wicked and Pippin). It featured a violinist and told Clementi's story through narration, photographs and video. Tyler was an engaging young man, brother, and son who loved the violin and riding a unicycle (often simultaneously). Tyler's mother and brother spoke at the concert about Tyler and the work of the Tyler Clementi foundation, dedicated to ending "online and offline bullying."

Broadway composer and lyricist Andrew Pippa wrote I Am Harvey Milk, a stirring tribute to the famous politician and civil rights leader. The work featured a superb soprano, Seattle native Rachel DeShon. Pippa appeared as Harvey Milk, a role he first performed at Lincoln Center alongside Kristin Chenoweth and a 120 member All-Star Broadway Chorus. Perhaps it is just my local bias, but it is difficult to imagine that the strong Seattle production was exceeded by its star-studded Gotham cousin.

Seattle Men’s Chorus, founded in 1979, is is the largest gay men’s chorus in the world with over 350 singing members. Seattle Women’s Chorus, which made its premiere on stage in 2002, has over 300. Flying House Productions, the umbrella organization for both, is an arts non-profit which acts as a "voice for acceptance" in our region. It it also influential in the music world, having commissioned premieres from some of world's leading composers (including Gian Carlo Menotti), and collaborated with guest artists such as Mark Morris, Bobby McFerrin, Natalie Cole and Maya Angelou. It is interesting to read the History of the Chorus, not only as the impressive story of the organization, but also as a chronicle of the gay rights movement in our region over the past 35 years.

We are looking forward to the Seattle Women's Chorus show in October, a return to lighter fare. Hallows in the Cathedral promises to enrapture the audience with a "dark and erie spectacle" in the shadow of the moon.