Twenty five down. Thirty to go. 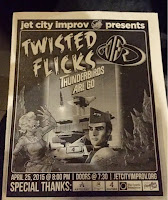 Jet City Improv's U District theater was packed on a recent Saturday night for a screening of the English sci-fi classic, Thunderbirds are Go.

Before the show Jet City's cast members took written suggestions for themes and dialogue from the audience. Those ideas, shared with the audience in advance, informed the improvisational re-dubbing and involved the audience in the creative process.

The first Twisted Flicks performance came on Halloween night in 1997, when improvisers re-dubbed the classic B-movie Creature From the Black Lagoon. Although Thunderbirds is similarly dated and corny, the improv players show respect for the material. In the introduction they explained the marionette film technology used to make the movie and why it was innovative and "state of the art" in 1966.

In its 22nd year, Jet City Improv is high-energy collision of talent, humor, innovation and commentary that is fresh and thought-provoking. It is all about fun; they never take themselves too seriously.  In 2003, after years of performing in various Seattle venues, Jet City moved into its current home on the north end of the Ave in the University District. With control of an entire theater they were able to begin producing improvised plays (a series now referred to as Jet City Improv Presents) that cover everything from political satire to musicals, murder mysteries, and more.

Jet City also has a 40-week improv training curriculum (known as the Jet City Improv Academy) as well as outreach programs that provide free performances and workshops to homeless and incarcerated youth in Seattle, and physically ill children around the state.