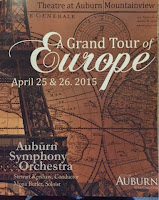 It is a bit of a drive from Seattle to Auburn, but it was well worth the trip to hear the Auburn Symphony Orchestra. It occurred to me that the reverse must be true for the thousands of folks who live in the valley and hills south of Renton: how fortunate to be able to enjoy an orchestra of this caliber without the drive into the city.

In 1996, Conductor and Music Director Stewart Kershaw assembled a talented group of regional musicians including a core group of artists from the Pacific Northwest Ballet Orchestra, where Kershaw had been music director for 26 years. (Prior to that, he had performed with the Royal Ballet in London and held permanent posts in Paris, Lyon, Munich and Stuttgart.)

The Sunday afternoon performance I saw was styled as “A Grand Tour of Europe” through territory the conductor knows well. The very appealing “tour” featured Austrian, Italian and French composers (Mozart, Vivaldi and Bizet) along with a work by English composer Edgar Elgar featuring principal bassoonist Mona Butler.

The symphony will return to a beautifully renovated Auburn Performing Arts Center in downtown Auburn later this year for its 2015-16 season. At the concert Maestro Kershaw mentioned that the orchestra is particularly looking forward to a world premier next January of a work written for the orchestra by Daniel Ott, a local composer gaining international recognition as a rising star.
Posted by Sandy McDade at 6:52 AM