Forty seven down. Eight to go. 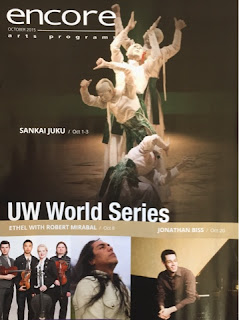 For the start of its 34th season the UW World Series presented Umusuna, a new work by Sankai Juku, a contemporary butoh dance company from Japan.

Umusuna was a visually stunning performance, beautifully lit and accompanied by haunting music. A thin stream of sand fell at a single point on the stage for the entire ninety minutes, a beautiful and striking metaphor for the work's theme, described in the program as Memories Before History. The program explains that the Japanese word umusuna is rooted in concepts of birth, existence and nothingness, the ground and soil, and one's native place. The dancers' movements were contained and precise, and the ensemble flowed seamlessly between various combinations and the full company of eight dancers.

This was my first experience of butoh, described in the program as the only genuinely Japanese form of modern dance as well as a leading world trend. Alice Kadershan did a wonderful preview of the show in the Seattle Times that describes butoh's origins.