Forty down. Fifteen to go. 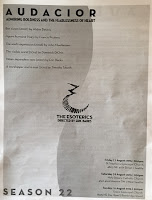 We weren't sure what to expect when we set off to a choral concert at St. Stephens Episcopal Church in Seattle recently. After all, the group was called “The Esoterics” — where did that name come from, we wondered?

It happened like this: In early 1992, conductor and ethnomusicologist Eric Banks brought together a group of singing friends to perform his Master’s and Doctoral recitals in Choral Studies at the University of Washington. After Banks’ recitals were completed the group wanted to keep singing together, so Banks chose a name for his ensemble based on the Greek adjective εσοτερικος, which describes a close-knit community and the secret knowledge that its members share.

Now in its twenty-second season, The Esoterics is a well respected Seattle based vocal ensemble dedicated to performing rarely-heard contemporary a cappella choral works from around the world. Since 1993 the group has performed over 300 concerts throughout the Pacific Northwest and has commissioned and premiered more than 100 new works for a cappella voices in dozens of languages.

The program we saw, Audacior, was a collection of modern choral music "celebrating brazenness, bravery, and bravado." The chorus performed six works inspired by "revolutionaries, journalists, professors, nonconformists, and those unafraid of speaking truth to those in power."

It turned out to be a thoroughly enjoyable evening!
Posted by Sandy McDade at 5:13 PM