Forty four down. Eleven to go. 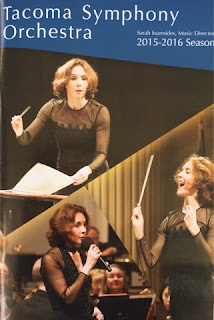 Tacoma is excited about its new orchestra conductor, Sarah Ioannides, and with good reason. They’re calling it the "era of Sarah."

The recent opening of the Tacoma Symphony Orchestra's 2015-16 season showcased her in a winning combination with high-voltage pianist Andreas Boyde and an orchestra obviously energized by her leadership. In her second season as music director, Ms. Ioannides has impressive credentials. Trained at Oxford and Julliard, she has conducted throughout the United States and around the world. The New York Times described her as "magic" and said she conducts with "unquestionable strength and authority".

The concert began with a robust singing of our National Anthem accompanied by the Orchestra. And I do mean singing. This audience loves music and they don't just stand there while someone else sings the Star Spangled Banner. Styled the "Russian Season Opening", the evening featured works by Prokofiev, Tchaikovsky and Mussorgsky. The large and enthusiastic audience was particularly thrilled by pianist Boyde's performance in Tchaikovsky's Piano Concerto No. 2.

Tacoma Symphony Orchestra, which began in 1946 as an amateur orchestra, has been a professional symphony for 20 years. With 80 contracted musicians and an affiliated community chorus, the Orchestra performs annually to an audience of over 15,000. It has strong community support from patrons and many donors in addition to ArtsFund. Education is central to its mission; the symphony's flagship education program Simply Symphonic focuses on 5th grade students with classroom programs and the opportunity to attend a specially-created concert at Tacoma's Pantages Theater.

Ms. Ionnades follows the very successful 20-year tenure of Harvey Felder, who took the organization from a community orchestra to a professional symphony. Together with a fine company of dedicated musicians, Sarah Ioannides and the Tacoma Symphony Orchestra have a bright future indeed.