34. The Burke Museum of Natural History and Culture: 80 Days of Summer

Thirty four down. Twenty one to go. 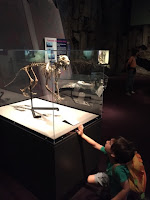 The Burke Museum on the University of Washington Campus was a wonderful mid-summer outing for two kids of different generations (a sixty something Grampa and a very active five year old).


A bit shy at first, before we left the Grandson insisted we see all the exhibits and do all the special fun stuff for kids – which turned out to be a lot. We made a Tyrannosaurus Rex mask, scoured the museum on a dinosaur scavenger hunt, and learned dinosaur secrets hidden in a mystery box. Many other kids were enjoying the museum that rainy summer day, including large groups of day-campers from the YMCA and the Boys & Girls Club.

Founded in 1885, the Burke is a research and collections-based museum. The collections contain over 16 million objects and are used for education, research, and the preservation of our cultural heritage. In addition to two popular traveling education programs, more than 35,000 Washington K-12 students visit the Burke every year. The traveling programs, Burke Boxes and BurkeMobile bring objects and educators directly to classrooms across the state.

The Burke's collections are used by researchers from around the globe on topics ranging from medical research to the health of Puget Sound. The museum is also an important repository for our cultural heritage, preserving and displaying thousands of beautiful objects that teach us about the past and inspire new contemporary works of art.