Thirty five down. Twenty to go. 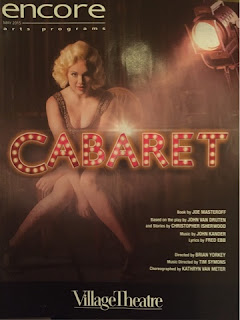 We saw the opening night of Cabaret at the Everett Performing Arts Center. It was everything we have learned to expect from the Village Theater, and more.

The production sought to explore the musical as a memory play for the male lead, Cliff. In his program notes, Director Brian Yorkey describes Cliff as a man searching "to understand who he was and who he became as a result of his experiences." This theme resurfaces with every character. They all must decide who they will be "when faced with difficult decisions in a world that is full of evil." Those choices, Mr. Yorkey believes, are what Cabaret is truly about. "It's a play about choice and consequence. It is a journey of seduction and destruction that forces us to take an honest look at ourselves and our world."

For me, a couple highlights of this solid professional production were Billie Wildrick's performance as Sally Bowles (which got outstanding reviews), and the onstage Kit Cat Club orchestra led by Tim Symons and described as "sizzling" by the Seattle Times.

A great deal could be written about Village Theater's phenomenal success. It begins in 1979 at a little old movie theater in what was then the small town of Issaquah. It goes on to include a 36-year track record of professional shows, strong and varied educational programs, and a very successful expansion in Everett.

A single page on the Village Theater website tells the story. It is the page where you can track the progress of Village Original shows as they are produced around the world. It lists over 80 original productions back to 2002, including Next to Normal written by Cabaret's director and Issaquah native Brian Yorkey. Developed and first produced at Village, that show won the Pulitzer Prize and three Tony awards in 2009.

At the Cabaret opening we said hello to music director Tim Symons. Years ago Tim did musical theater with my kids in Issaquah.  My brother Scott and I also renewed an old connection with Village Theater's Executive Producer Rob Hunt. A few years before Rob helped found Village Theater, Scott and I appeared with him in musicals at our alma mater, Highline High School. We also reflected a bit on our parents. Rob reminded us that he used to take dance lessons from our mom in her Seahurst studio, and for 35 years Rob's folks were the leading lights of Burien Little Theater.