Thirty six down. Nineteen to go. 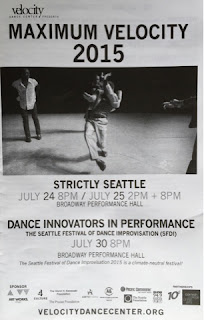 I think of myself as a dance lover, but before seeing this show I really knew next to nothing about improvisational dance. A night with Velocity Dance Theater (and some helpful coaching from an ArtsFund staff member) cured my ignorance and provided a wonderful introduction to this exciting dance form.

Dance Innovators in Performance featured eleven works created and performed by the faculty from Velocity's 22nd Seattle Festival of Dance Improvisation. Each built around a theme or narrative, the works were performed by both individual dancers and groups. They ranged from light and whimsical to thought-provoking and even challenging.  Some were done in silence, others to music ranging from vocalization to an onstage didgeridoo.

After the performance I spoke with Krina Turner, an ArtsFund staff member who is also a dancer, and who had performed in the Festival two years ago. She explained that improvisational dance began in the 1960s in reaction to modern dance, just as modern dance had been a movement away from strict ballet technique. I also learned that dance training and good technique are just as important in improvisational dance as they are in more traditional forms; and was reminded that, after all, improvisation is often used by choreographers in the creative process.

Since 1996 Velocity Dance has done a lot to advance contemporary dance and movement-based art in our region. Home to dozens of independent choreographers, Velocity has classes every day, performances almost every week and more than twelve artist development programs. It is renowned for producing innovative, cutting-edge work.

Velocity has weathered a few storms, most particularly the challenge of losing its original home of 13 years back in 2009. While continuing its programs without interruption Velocity found a new location on Capitol Hill and conducted a capital campaign to renovate the facility. In 2010 Velocity moved into a beautiful new facility, a cohesive space which links the offices, theater and studios.