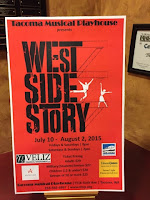 Tacoma Musical Playhouse is a wonderful example of an arts organization that fills an important niche in its community. The community is Tacoma and the niche is musical theater performance and education. We recently asked a friend who is raising a family in Tacoma if she knew about Tacoma Musical Playhouse. "Of course!" she replied. Turns out they have season tickets, and a good friend's daughter starred in a recent TMP production.

West Side Story featured an energetic young cast and an enthusiastic full house. As Tacoma's only dedicated musical theater company, TMP taps into a pool of strong local talent. TMP's home is the Narrows Theater (near the Narrows Bridge) and it is obvious when you walk through the door that the Company enjoys a great deal of community and volunteer support.

TMP was founded by Jon Douglas Rake in 1994 with a goal to enrich lives through musical theater. Its upcoming 2015-2016 season will feature seven productions, with four additional shows in the TMP Family Theater series. The organization also has many educational programs, including early acting camps for children and classes in acting and dance for young people up to age eighteen. The theater offers three five-week "After School Academies" and youth camps during school breaks, all of which culminate in a musical theater performance. The educational offerings also include a senior-theater program, The Young at Heart Players.

In addition to benefitting from regular ArtsFund grants, TMP recently raised the money for a bright new box office sign outside the theater through ArtsFund's Power2give program.