Fifty five down. All Done!! 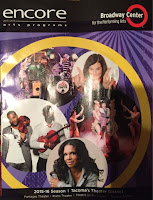 In addition to being a fabulous entertainer and winner of six Tony Awards, Audra McDonald is a student of American Musical Theater. For this show Ms. McDonald and music director Andy Einhorn curated a selection of beautiful and engaging songs from the very familiar to those known only to the most ardent musical theater fan. She narrated the performance with wonderful explanations of each number's history, and of the actors, composers and lyricists who have been her inspirations.

McDonald knew she had an audience of kindred spirits.  With only slight prompting, the audience enthusiastically performed several verses of I Could Have Danced All Night all on its own, after which she complimented the impromptu chorus and, in particular, two sopranos near the stage. (She politely reminded them it was "her show.")


After the performance we had dinner in Tacoma with some good friends, one of whom was on the Broadway Center board. Our friend pointed out that the audience, which packed the Pantages Theater, had come from all over the region. That is what the Broadway Center does; based in Tacoma, it brings focused support to all forms of live performance in our region through four venues, seven resident arts organizations, and eight separate education programs.

This was the perfect final show for my ArtsFund project. In the past 12 months I have learned so much about our region's amazingly rich visual and performing arts. It has been fabulous to experience a broad spectrum of art, much of it beyond my comfortable favorites. This show was perfect reward for reaching my goal, however. It brought me back to something I already knew: I love American musical theater.


There are many to thank for helping with this project, which I will do in a final post.
Posted by Sandy McDade at 11:45 AM