Fifty four down. One to go. 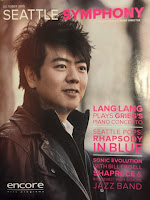 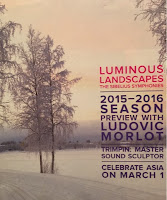 The two Seattle Symphony concerts we saw for this project demonstrated the orchestra's incredible depth and broad audience appeal. The first, Luminous Landscapes, featured the work of Finnish composer Jean Sibelius. The second, Sonic Evolution: Under The Influence was a co-presentation with the Earshot Jazz Festival and included Symphony performances with the Roosevelt High School Jazz Band, renowned jazz guitarist Bill Frisell and the very popular local singer Shaprece.

In celebration of the 150th anniversary of the composer's birth the symphony devoted six programs entirely to Sibelius music, presenting all seven of his symphonies. We saw the first two in a performance conducted by Thomas Dausgaard, Conductor Laureate of the Danish National Symphony. We particularly enjoyed the beautiful tone poem Finlandia, written following Russia's 1899 February Manifesto severely limiting civil liberties in Finland.

The Sonic Evolution concert began with composer Derek Bermel's Migration Series for Jazz Ensemble and Orchestra. Composer Bermel joined the orchestra on clarinet along with the Roosevelt High ensemble. The music was based on 60 panels about the Great Migration painted in 1941 by artist and former UW professor Jacob Lawrence. The panels were projected above the orchestra, art and music combining in a moving telling of the migration, from wide open southern landscapes to life in northern cities. Following a new work by Wayne Horvitz, Shaprece's high-energy performance (complete with two onstage dancers) was the perfect cap to a diverse, high quality concert, full of youthful energy both onstage and in the audience.

Under the direction of Ludovic Morlot since 2011, the Seattle Symphony performs to more than 500,000 people each year, both onstage and through radio broadcasts. Its home is in Seattle's beautiful and acoustically superb Benaroya Hall. Each year the Symphony's education and community engagement programs reach over 65,000 children and adults. The Symphony has a deep commitment to new music, commissioning many new works each season. Since its founding in 1903 the orchestra has made nearly 150 recordings, received 18 Grammy nominations and won two Emmy Awards. A gem in our midst, indeed.