Fifteen down. Forty to go. 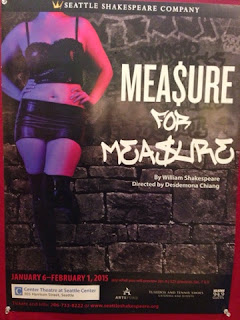 Measure for Measure is a play about sex - at least that is what award-winning Director Desdemona Chiang tells us (in a bit more graphic terms) in the program notes for the Seattle Shakespeare Company production. Chiang's sure hand is evident throughout this work, which she describes as "Shakespeare's most urban and global play, in a multifaceted civic setting - streets and alleys, brothels, courthouses, prisons, shelters and churches - and in it we recognize our own cities and communities, imperfect as they are."

It is a good sign when you hike through a piercing cold Saturday afternoon rainstorm to find every seat taken and standby patrons in the lobby hoping for a seat. The word was clearly out about this show. After the 2014 season's success, however, it is also clear that the word is out in general about Seattle Shakespeare Company.

In addition to performances at The Center Theater and other Seattle venues, the company offers a wonderful variety of programs that bring classical theater to audiences across the state. They include free outdoor performances in parks throughout the Puget Sound region (known as the "Wooden O" series), regional tours, and programs for educators and students. Macbeth and Romeo and Juliet will be the touring productions for students across Washington this year. These 90-minute performances are fresh and accessible, with small casts playing multiple parts and classroom workshops that accompany the shows.

Tartuffe and Othello are the "indoor productions" scheduled for this spring. Don't wait to get your tickets! http://www.seattleshakespeare.org/2014-2015-season/