Seven down. Forty eight to go. 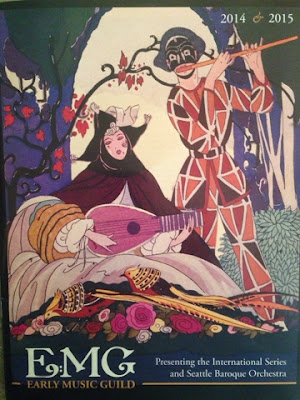 I have to admit that Jim Duncan has been remarkably supportive of this project, particularly considering that we are planning for him to buy us dinner at The French Laundry when he loses the bet. Saturday evening Jim and Gaylee joined us at Town Hall for the Seattle Baroque Orchestra's European Christmas Potpourri.

Before the show we ran into a friend, obviously an Early Music Guild regular, who commented, "I didn't know you were into early music." This event helped me appreciate the difference between enjoying Bach and Handel and being "into early music." The term refers both to a repertory of music written before about 1800 and an approach to performance informed by history, including the use of period instruments. The Early Music Guild is a nonprofit formed in 1977 to promote early music in Seattle. Its main stage events include the International Series and Seattle Baroque Orchestra.

Saturday's performance featured Eric Milnes as guest conductor and harpsichordist and Helene Brunet, a superb Canadian soprano. Both gave virtuoso performances and were a perfect complement to the orchestra, whose members were obviously enjoying themselves. Their enjoyment was reflected in the music. A highlight was Handel's cantata Gloria in excelsis deo, which was discovered by a German music professor in London in 2001. The evening capped a great week of live music performance, from fine fiddling in Ballard to French Carols on Capitol Hill.