Thirty down. Twenty five to go. 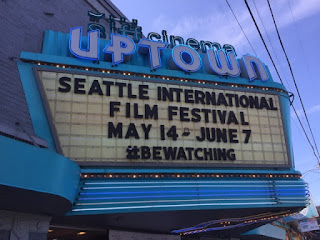 I took this picture of the Uptown marquee one evening in early June. As I stood outside the theater a young couple burst through the doors to ask what I was doing. They were very excited and I soon learned why: the film they had produced and directed was about to have its first screening. For me, their enthusiasm captured the essence of SIFF. We tend to associate film festivals with glamorous movie stars on red carpets. SIFF, however, is all about the joy of making and seeing movies, with a huge and highly diverse audience and a prodigious number of films from around the world. The two young filmmakers epitomized that joy.

Our family looks forward to the festival each year, and many texts are exchanged about who will be seeing what and with whom. This year my favorite was the quirky, endearing and well-witten Canadian film Henri Henri. It is about the life and loves of a boy whose only skill is changing light bulbs. He puts that skill to good use while building a life outside the convent where he was raised.

Founded in 1976, SIFF is a year-round film organization bringing independent film to the Seattle area from all over the world. SIFF produces the annual Seattle Film Festival, SIFF Cinema, and SIFF Education. In addition, SIFF operates the Uptown and Egyptian theaters and the SIFF Film Center on the grounds of Seattle Center.

The 25-day-long Seattle Film Festival is the largest and best attended film festival in the United States. Each year it attracts over 155,000 attendees and more than 450 extraordinary features, short films and documentaries from both major and independent American studios, as well as international works from Europe, Asia, Africa, Latin American - over 80 countries in all.