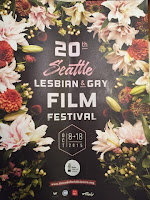 Sometimes one arts event will inform and inspire another. At least that was the case for us with Welcome to this House at the Seattle Lesbian & Gay Film Festival.

The film, which explored the life of poet Elizabeth Bishop, was in the Festival's "Know Your History" category. It was the perfect sequel to Dear Elizabeth, an excellent play produced at the Seattle Repertory Theatre last season about the friendship between Bishop and poet Robert Lowell. Screened at the Northwest Film Forum Theater on Capitol Hill, the documentary told the rest of the Bishop story. I particularly enjoyed the sequences about the poet's life in Brazil and her fiery relationship with Brazilian architect Lota de Macedo Soares. Prior to the movie the group Puget Sound Old Lesbians Organizing for Change did an interesting and light-hearted presentation about their programs.

Now in its 20th year, the Festival had 26 co-presenters and filled thousands of seats at five theaters around Seattle. It showcased over 30 films selected from more than a thousand submissions. It explored serious and important themes, but was also a lot of fun – there were a dozen parties and receptions over the Festival's eleven days, including a Closing Night Gala to celebrate the winners of both juried prizes and those awarded by popular vote.

Three Dollar Bill Cinema provides access to films by, for and about LGBT people and their families. In addition to the Festival, their programs include outdoor theater, a transgender film festival, youth programs, and acting as fiscal sponsor for film projects. I was pleased to see that the Three Dollar Bill Cinema homepage thanks donors who, through ArtsFund's Power2Give program, helped them establish a new home in the 12th Avenue Arts building on Capitol Hill.