Eleven down. Forty-four to go. 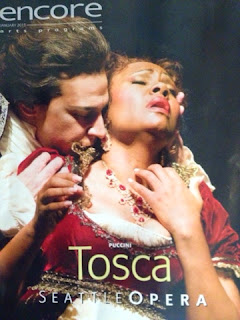 My opera knowledge is very limited, so on Saturday evening I was fortunate to attend Tosca with our son-in-law Andy and his good friend Stephen. Andy appeared in Seattle Opera's 1993 Tosca production (as an eighth grader) and in 1998 was the Opera's "volunteer of the year" for his work as a score reader, all before he went off to music conservatory in Boston and became good friends with his vocal-music-major classmate Stephen.

Tosca certainly had everything Saturday evening. A beautiful girl, a lecherous villain, murder, treachery, and a famous leap from the parapet. My favorites were Tosca's lovely aria at the end of Act 2, and Greer Grimsley as Scarpia. (The Opera has announced that he will return in The Flying Dutchman next season.)

My companions took my opera education seriously, making sure I understood how lucky we are to have opera of this caliber; how it attracts top talent; why the orchestra is so excellent; and how interesting it will be to see new General Director Aidan Lang's influence in the coming years. They helped me understand the performance from the artist's perspective, pointing out the opening night nerves that could be seen to diminish as the artists began to sing, and the challenge of waiting offstage then entering to immediately sing a difficult passage.

Seattle Opera sends helpful emails to ticket holders before the show, answering questions and explaining opera traditions and etiquette. A good idea, but I worry that it may contribute to the notion that you need some special expertise to enjoy opera. Actually, it is as simple as going to a movie. No tie required. Get a ticket, find your seat, turn off your phone, sit back and enjoy. Opera is everything.

So what became of my two music conservatory graduates? Andy applied his artistic ability and musical discipline toward a graduate degree in architecture. He is extraordinarily busy with his Ballard-based interior architecture practice www.orestudios.com. Stephen is the executive director of PHAME, a very innovative Portland non-profit that has soared under his leadership. PHAME serves visual and performance artists with developmental disabilities www.phamepdx.org.